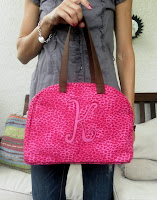 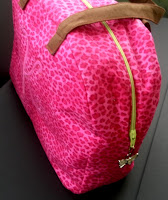 I have a client named "A" who I just love working with!! She has two little girls- a baby girl and an elementary aged daughter named "K". When you have a conversation with "A" you can tell she is head-over-heels NUTS about her children! She sent me the cutest picture ever of her baby who had crawled inside the diaper bag that I made- it was precious and I adored it!!
"A" wanted to get her daughter "K" a special treat for the new school year so handmade lunch box it is!! "K" loves pink, brown and leopard and this lunch bag will compliment her pink leopard backpack that she got from the Justice store......seriously, how cute does that sound? Hopefully "A" will order outfits for me to make her as well because if she carries around a pink leopard backpack in elementary school- she is already my fashion soul mate!
The lunch box is roughly 12 inches wide, 9 inches high and 5 inches across. It is roomy and should fit her lunch beautifully. I made the strap just long enough that if she wants to throw it over her shoulder it will be possible. It is thoroughly lined with thermal lining that will keep colds-cold and hots-hot! I'm anxious to hear how "K" responds when she gets it!
"A"- thanks for being amazing to work with- you are so sweet!!
"K"'s lunch box is $32

A new purse for Miss Jenn!! 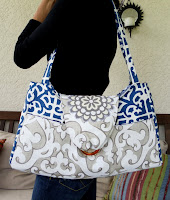 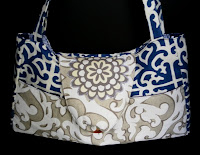 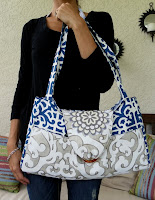 My friend Jenn is my go to girl for most things- she is super empathetic, a wonderful listener and has a great knack for problem solving so when I get stressed I call my mom....or Jenn ;). She has been a huge supporter of my business and has given me the confidence and encouragement to do things that would typically scare the panties off of me (my use of the word panties being somewhat of an inside joke).
My usual birthday present for my close friends is designing a purse for them since it is the only thing that I know how to do (the only bad thing is that most of my friends have birthdays in the summer!!! Goodness gracious! get ready for more mushy friend posts this month). I have been waiting to make this one for Jenn for months now- eyeing down the purse that I made for her last year.....her stuff popping out of it but still totally devoted to using it even though she needed something bigger (is that a good friend or what?). So every time I see her I am taking a mental list of the specifics that her new birthday purse MUST have.
It needed to be bigger but she thinks that she doesn't need a big purse so I made it longer but skinnier so it didn't feel bulky. She needs outside pockets for sure and she needed a way for it to close that would still allow easy access- I thought a zipper would be too cumbersome so I chose this flap. It has inside pockets as well, of course! It has a great length strap that is easy to sling over her shoulder and great for toting stuff around for her two kids (that I love to absolute pieces).
It seriously took me hours of pouring over fabric just to find the right one for her. Her style is more classic than mine but she loves rich, vibrant colors she leans towards structured patterns.......I guess pretty, classic, tailored are words to describe it. I was thrilled with how this combination turned out after nearly frying my brain trying to find the perfect one!
This style of bag is really in between a tote and a purse- super utilitarian but I dare say gorgeous as well.
I love you like crazy Jenn!! You are such a rock in my life. The love that you have for your family, friends and your amazing faith make you a dream girlfriend to all of us who are blessed enough to have you in our lives honey-XOXO!!
Miss Jenn's Tailored Tote is $52 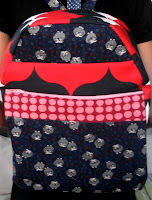 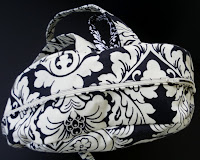 I had a fantastic client named "D" ask me to do a purse party last month. She teaches at an elementary school near me and she has a wonderful sense of style (her mom says she was born to shop ;)) and always looks super cute and pulled together (next to my "I have three young children" look with unwashed hair and random bits of thread covering me at all times, it can be intimidating but always inspiring!). Her teacher friends were very kind and I loved spending a few hours with them!
Two of the girls at the party are in college and ordered backpacks (hallelujah!) in their school colors. Both girls are absolutely adorable, very smart and surely unstoppable! I don't find myself around college kids that often and just loved working with them-thank you "C" and "K"!!
Each pack is lined, has two small pockets on each side, adjustable straps and a large zippered pocket on the front. It zips open on the top as well.
I've gone off the deep end being excited about these so I'm in the process of making at least 7 for my own kids and my friend's kids.....can we say obsessed?? If you see me trotting around with my own backpack soon, listening to Fugazi and wearing blue nail polish, I'm OK.....just feeling a little nostalgic for college!
On that note, my big guy starts Kindergarten this week......where on earth does the time go??
xoxo,
holly
Adult backpacks are $62
Child backpacks are $58
Posted by holly @ lacijean at 8:48 PM 1 comment: 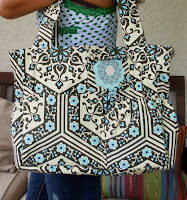 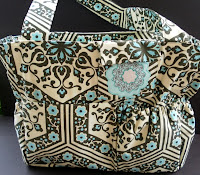 I love this diaper bag....I loved it from the first second I made it for my sister in law but now that I tweaked it a couple of inches here and there I adore it even more. I have made SO many this summer that it still astonishes me- it is hands down the item that has been the most ordered lately.
I had several beautiful ones made that I took pictures of but when my 15 month old was having a melt down that even surprised me, I had the genius idea to hand him my camera to appease him (I was picking my parents up at the airport so he was in his car seat). I received the camera back in one piece (surprisingly) and it DID calm him down (like I said, genius) but I discovered the next day that my sacred memory card had vanished- poof. My bright idea not so bright after all! All record of my diaper bag sweatshop vanished with the memory card :(.
One of these was made for my sister in law's friend who is expecting her baby I think sometime in August (congratulations!!). She is a graphic designer and had a beautiful website that I was able to pull inspiration from to pick her fabric. The top bag was made for my cousin's wife "M"- who I'm just crazy about and is super adorable!! She has three kids too (I am pretty sure she had 3 kids in 3 years so you know she needs a decent diaper bag!!!) and she has an awesome sense of style so I was super flattered that I was able to make her one.
As always, I can customize the inside pockets just for you although with this bag the outside pockets are so extensive you may not need many more! I actually made one a while back with an inside thermal pocket to keep the baby's bottles warm or the sippy cup cold (this costs more FYI) which I thought was a great idea- thanks "A"!!
Diaper bags cost $65
Posted by holly @ lacijean at 12:16 AM 1 comment: 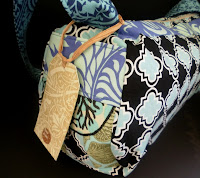 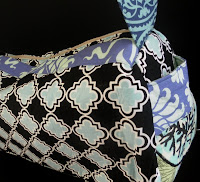 Mmmmmmm- my sister, I love that girl so much. Through thick and thin she is always my closest friend. Her birthday came and went in July and of course, I wasn't completely done with her gift. I finally sent this one to her this afternoon. I can only hope that she is not sick of getting purses for every occasion!! She is 4 years younger than me, much more composed ;) and is the kindest person on the face of the earth. She lives far away from me and there are certain days that my stomach hurts because I'm missing my nephew's life. The Lord knows I would smother him if I lived near him!!!
My nephew is now a toddler and my sister no longer needs a diaper bag so I brought the size down a bit from what she is used to. She wasn't too concerned with lots of outside pockets and her only request was that it zipped shut- so toddler nephew could be kept out of her stuff ;). There are two tiny pockets on each end of the bag to shove her keys in if she needs to grab them quickly.
Since my sis knows me well- being smothered in paint most of my waking moments- I knew she would be adventurous enough to handle me adding my hand painted fabric to her bag. I snuck it in on the tiny end pockets and I had glorious time working it in her scheme. I hope she remembers how crazy I am about her every time she uses it!!
Patti, I love you so much sweetheart- if I was half the person you are then I would be satisfied!! You are an angel. xoxo-
Holly
The Patti Ann Purse is $48.....if you would flatter me enough to ask me to hand paint fabric for you as well it would be an additional $8.
Posted by holly @ lacijean at 11:46 PM 1 comment: 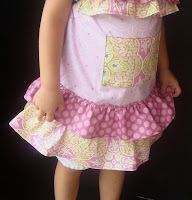 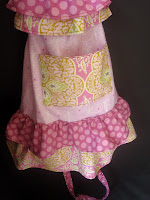 I don't have much time to type- we are on a short vacation once again before school starts but alas....this time my sewing machine came with me. I'm just too behind to have a "real" vacation (although honestly I would miss it) and my parents are here so they are spending lots of time with the kids and me being occupied for a bit will hopefully give them better quality time together.
I recently went through an apron obsession after the kid's Aunt D. made them the CUTEST aprons for Christmas and the kids went ga ga over them. Ultimately, I made an apron dress (see the photos on the right side of the blog for the front of the dress.....I will post the back of it soon) and I plan to make many more for my daughter because they are easy, adjustable and gorgeous! In the meantime- watching her make cookies with me in something as precious as this is just as satisfying!!!
I can make them in every size and the great thing about the strap is that it can move from one end to the other- making it completely adjustable for a perfect fit.
More apron posts to come soon.......even something for the little guys!!
An apron like this costs $30
Posted by holly @ lacijean at 8:24 PM 1 comment: 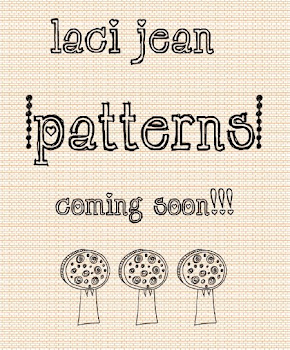 I teach art! Head over here to view my blog of project ideas and lessons!

My website is currently in progress- thanks to my wonderful little brother who is working on it for me pro bono!! For now, I just need you to email me at lacijean@yahoo.com and I will happily work with you on a piece that you create along with me or I can send you photos of what I currently have in stock and is ready to ship!
As for pricing- most of my posts have the price of the item at the end of my rambling. Please know that SOME things cost extra and some fabric costs a little extra but I will inform you before I make your item if there are any additional costs so you can decide what is best for you.

Thank you to all of my clients who work with me as I grow!! 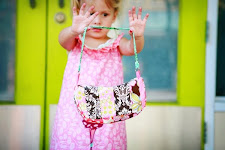